Hello!
I have missing IDs in my exported excel, although the forms have been sent from the tablet. Other IDs collected on the same tablet (same day) are also successfully sent and are appearing on excel when exporting the data. this issue is happening for the first time (we have been using kobo for several years) and i have different IDs missing in two different questionnaires.

Welcome to the community, @ne82! What is the tentative number of submissions you feel are missing in the server? Could you also outline the measures you followed to check that your data was sent to the server but missing?

we are collecting data in schools where each student has his own ID and we are filling several questionnaires for the same student. I know that in this specific school 18 we collected data from 46 students. In one of the questionnaires (anthropometric_measures_final) , i have ID 41 missing and in another questionnaire (child_assent_final) IDs 4 and 22 are also missing. when we checked the tablets, the three IDs were saved in sent forms as attached in the uploaded screenshots
can you please let me know what can i do 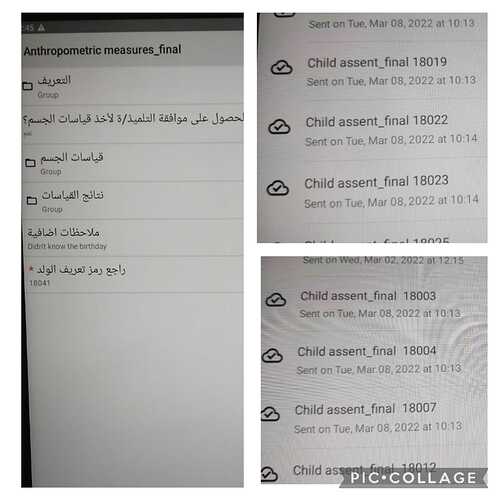 OK, so you mean the filled-up forms have been sent to the server, and are there under the View Sent Form correct?

OK, so have you also checked out the submissions from your server to see that these filled up forms are not there?

yes, exactly i can not find these IDs

@ne82, would you mind trying to check these submissions with other identifiers such as respondent’s name, address, sex, age, etc.?

I tried but couldn’t find them.

@ne82, would you also mind sharing the entire screenshot of the DATA>Table view with us? I would like to see if there are any submission inconsistencies between the one we have inside the table and the one situated at the top-right?

It seems like the project name in the server is Anthropometric measures_final: 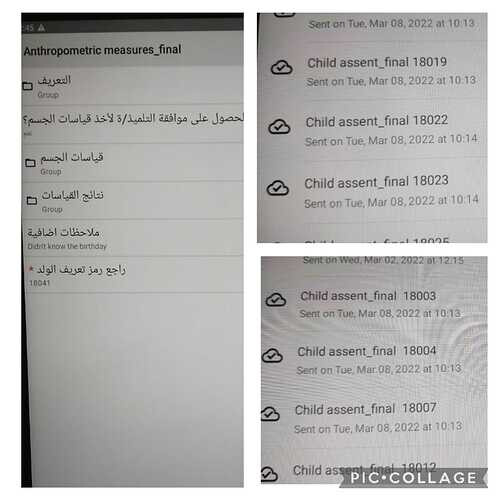 But the screenshot you are showing is that of Child assent_final. Aren’t they 2 different projects?

it is the same project; the same students are filling several questionnaires in each school. so the same students are filling the child assent_final and the anthropometric measures_final. that’s another way to verify if any ID is missing. As mentioned before, ID18041 is missing in anthropometric measures and IDs 18004 and 18022 are missing in child assent although they were sent from server as seen in the screenshot

@ne82, OK, so I am getting your point now. Much clear now. This means that you should have the sent file under the View Sent Form for both the sets you think have been collected but are missing in the server. Do you see those filled-up forms in your app?

yes, i can see them in the view sent forms but not in the submissions in the server…