Hello,
One data column does not appear when downloading (with the all versions option ticked), neither does it appear in the table, however it does appear in the report section (variable “name”). See screenshots attached - the Excel downloaded database missing the name, the report showing it, I have also attached the XLS form source file (with the question “name” and “other-autre” - which does appear in downloaded data.

Edit afterwards: I just realized the repeat_groups are also missing from the downloaded data… Although they appear when viewing the form, which is deployed.

What could be the problem?
Many thanks!

Welcome to the community, @effy1988! Did you make edits and redeploy?

Hi @Kal_Lam , many thanks for the quick reply. Yes I did make edits and redeploy, earlier in the month - not recently. Have checked the form history, it is redeployed correctly.

Hello @Kal_Lam , it’s now all fine!! I don’t know what happened - didn’t change anything… But it’s all good?!

Thank you for confirming @effy1988!

Hello @Kal_Lam ,
Same issue is happening again - same data missing from the table and download… As well as the repeat groups data. With the same file.
I did make edits few weeks and redeploy, all ok.
Any idea what could be causing the issue?
E

@effy1988, could you explain what is missing? Maybe with a screenshot so that we should also be able to understand your issue pictorially?

Hi @Kal_Lam, thanks for your reply. There are screenshots above showing the issue - it’s the same issue happening again. Last time, somehow it solved itself - but it reappeared?
Let me know if those screenshots are enough.
Thanks

@effy1988, is it the same data column tech_autre that is not visible or is it a different one this time?

@Kal_Lam , The column “nom” is not appearing - in the middle screenshot (XLS spreadsheet), you can see that there should be a column “nom” before “tech_autre”.
Repeat groups are also absent.

OK as a quick check would you mind to see if your latest deployed survey form has this question? If no, we could explore further.

Have just checked, yes it does have this question.

Could you share with me the following through a private message:

@effy1988, I see the variable tech_autre and nom under your DATA>Table: 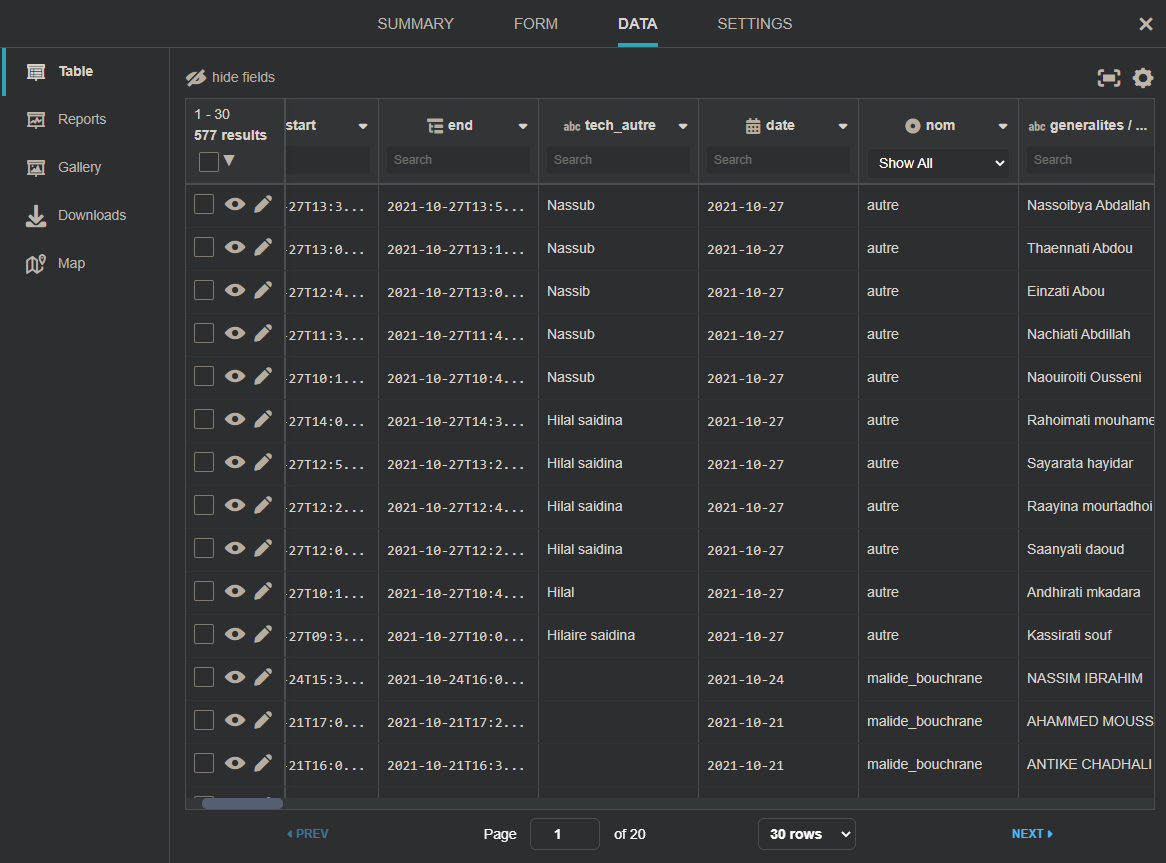 Hum… Indeed it now appears again… Honestly, not sure what happened, but I had downloaded the data yesterday and it was missing. Today it reappeared. I haven’t changed any download settings etc.
Same happened last time - reappeared after a few days.
Any idea where this might come from? As not ideal when we need the data on the day…
Thanks!

@effy1988, thank you for confirming. I simply changed the DATA>Table label view from label to XML values.

Thanks for the explanation, but that still does not explain why the data column including the repeat group data was missing from the download? I had downloaded w XML values.