Ability to *View* completed submissions in Enketo (and ideally pdf them)

What is the general goal of the feature?
We have several web-forms that use Enketo Grid Theme, with complex repeat logic. When admins want to view submissions afterwards, if we view them using the ‘single-submission modal’ view (from the data table, clicking on the little eyeball), then it is difficult for non-technical users to match up which data points relate to which parts of the Grid Theme form.

We would like a way for users to be able to view the forms exactly as they were submitted by the enumerator (i.e. using Enketo), without having to give edit access to those that don’t need to edit.

Can you sketch out graphically how you think this should look/work in practice?
An extra icon on the Data View screen that takes the user to the Enketo view of the form but where data can’t be submitted (ideally where the URL is a format that can be constructed from fields in the data download…) 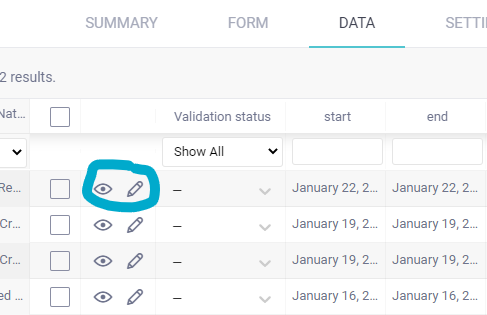 How useful would this feature be to other users or organizations?
useful, based on the multiple threads about viewing/printing completed submissions.

Create PDF from Sent From in Kobo Collect
Printing a submission as PDF
Recurring Form
Adding a feature in KoBoToolbox where the server automatically sends the survey reports in email?
Create a link to edit response from gives error message
Kal_Lam January 27, 2021, 4:01pm #2

Thanks @Kal_Lam ! Yes the "printer like print button alongside the eye like preview button and the pen like edit button" option would be magnificent to cater for my use case #2 above. And if it was a URL that we could easily get programmatically then that would also cover use case #3.

Use case #1 doesn’t need a pdf though - our validators just need to be able to open in Enketo without risk of editing the submission (especially now that giving someone ‘edit’ rights also means they can delete the submission too).

Thanks hugely for considering this!

Hello,
I would prefer:

For the role rights: Do we want everyone who has view right (even on raw level only) to be allowed to print? The (standard) print from View mode includes ALL variables. e.g… hidden, calculates and internals like username.

Hint: The print output from View mode (eye) and from Edit mode (pencil) are rather different in style and content, and from Edit the pdf is much longer. So, for a new multiple print option, we would need to decide which one is preferable (or add a style choice option).

Re the pdfing, I have just found out that Enketo already has an API that allows one to download a PDF of a submitted record (without showing skipped fields) - and apparently it is already implemented and works well. This would be PERFECT for me (we have lots of skip logic and repeat groups etc. so it would be fab if they were hidden).

So, the Enketo API documentation to create a pdf is at API Documentation

My request is now for KoBo users to please be given an endpoint to access the Enketo post-instance-view-pdf functionality via the KoBo API.
(if a button can also be added to the UI then great! but direct API access would get us a long way).

According to @martinjr in Access Enketo API functionality through KoboToolbox - #4 by martijnr the Enketo API can’t be accessed directly by KoBo users as the API key that is needed to get to Enketo part of the server config rather than associated with the Kobo user.

@nat thanks for highlighting that this is something users are needing — I will bring it up with the team. Hopefully we can slot it in soon

Hi @nat, I’ve implemented your requested changes, minus the PDF option for now as it requires some more configuration on our side. You can follow the change here for when it might be merged into production.

Wow, fastest response to a change request ever! Thanks a million @Josh !

Just putting some cross-references here to other threads re printing/pdfing, if needed in future:

Dear Dominique, dear Tino, I think it’s even not necessary to first deploy; you can also print (to pdf) from Preview mode. @Tino: Do you see any difference? There are some limits for this print-out: If a choice-filter is used, any(!) choices will only be shown if the choice-value is activated and also only part of all choice will be printed. See example attached. The skipping/navigation and dynamic choices are not specified in the print-out. Skipped parts come with very light gray. Also othe…

Sorry I am new to the platform and I want assistance on downloading forms in PDF.

What is the general goal of the feature? We have several web-forms that use Enketo Grid Theme, with complex repeat logic. When admins want to view submissions afterwards, if we view them using the ‘single-submission modal’ view (from the data table, clicking on the little eyeball), then it is difficult for non-technical users to match up which data points relate to which parts of the Grid Theme form. We would like a way for users to be able to view the forms exactly as they were submitted by …

Hi @Josh hope all’s well. Just wondering, do we know when the power to create a pdf might be available on KoBo? And/or ability for a validator to view a form in Enketo without having the power to edit?
Know you’d made a change for the latter piece a few months ago but not sure how long it takes to integrate.
Thanks loads and best regards!

Hi @nat, we had a look at integrating the PDF creation but due to security issues it would introduce on the server, we decided not to proceed with it at the moment. Regarding a validator, that is certainly a valid feature request but it’s currently not in the pipeline.

Regarding the view-only change, that is still coming but was unfortunately put on the back-burner — it will hopefully be integrated soon

Hi @nat, this feature has now been merged into our beta branch and should be available in production soon

Hi @nat, in case you missed it, this is now live on HHI and OCHA:

Hello KoBoToolbox Community! We are pleased to release version 2.021.30 with the following changes. This release: has been deployed to kf.kobotoolbox.org as of 02:00 UTC on 17 August; has been deployed to kobo.humanitarianresponse.info as of 03:15 UTC on 19 August. While the work offered here has gone through a cycle of internal testing and improvement, please do not hesitate to report any problems that you find. This helps the community as a whole in addition to yourself. Thanks. New featu…

Note however that there is this issue currently in Enketo Express regarding the use of the view endpoint:

**Describe the bug** A call to `/api/v2/instance/view` and then a subsequent ca…ll to `/api/v2/instance` will throw `Not allowed. Record is already being edited`. But no exception is thrown when the order is reversed. **Expected behavior** Editing should not be prevented when an instance view url is created.

Dear Kobotoolbox community,
in reference to @nat additional request, would like to point out that an endpoint to access the Enketo post-instance-view-pdf functionality via the KoBo API would be really wonderful.

Requested in the case of bulk pdf export need (pdf format more reliable to audit than excels).
The new endpoint '/enketo/view" is great but for information, we have tried to automate the pdf export via request, Selenium or pdfkit in python using it without success.
Happy to share our tests.

A direct access to pdfs via the api would be so handy!

Many thanks and best regards!