Thanks @Josh - yes agree some complexities with certain languages and non-uniqueness. Re multiple languages, I would just go with one (specified as a param) rather than trying to return all languages at the time. Acknowledge what you’ve said above, and also that the labels can be verbose - an in-between step that would massively help would be to at least have a flag to include/exclude groups from the ‘name’ key. Could then have one API call to get the big list of name-label mappings for a fo…

What is the general goal of the feature?
To streamline ability for API users to easily import data into Power BI/PowerQuery and similar tools, as they will no longer have to put in code to extract the “name” of each field without including the “group”.

At the moment, if a user calls API (v1 or v2) to get submissions data (https://[kpi-url]/api/v2/assets/{asset_uid}/data/ (access submitted data), e.g. https://kobo.humanitarianresponse.info/api/v2/assets/a6krNsaSnJFJDM9BgMSU3r/data/) then they get JSON response keys that include the group (s) as well as the names. This means that

This means that it’s not possible to map the keys from the JSON to the list of “names” from the XLSForm - and also makes it more complicated for users to read (e.g. 20179, 17316, and others previously e.g.

How do we get rid of the group name in the dataset while downloading data through API? API

Hi, When is try to export the Kobo Collect Data through API it includes the group name in the header instead of only the name of the field as it gives when we download the data from Kobo Login. What is the reason behind this or how can i export the API data in excel format with only question label as header not the group name in it.

I would propose having a parameter option to allow the user to specify whether or not they want groups to be included - in the same way as the XLS download option to “include groups in headers” or exclude groups: 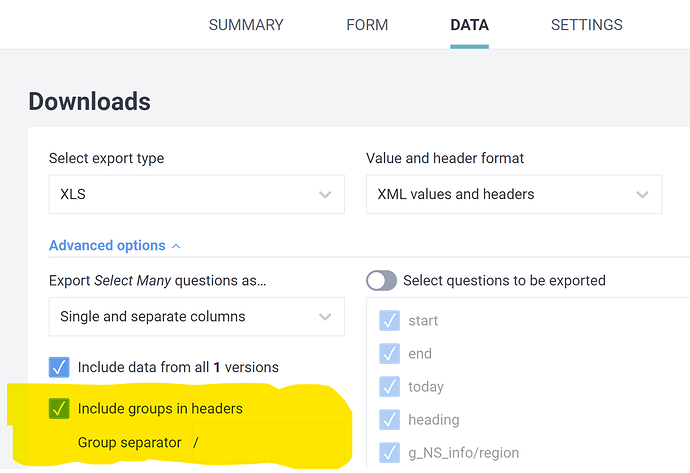 Names are unique in the XLSForm so it shouldn’t be a problem to just remove the groups for non-repeat scenarios. The curly case will be where there are repeats - e.g. where the square brackets [ ] are in example JSON above - these will likely need to keep group names (or alternative identifiers of some kind) in order for there to be something returned at the top level. Would take dev advice on this.

What are the most likely user stories for how and when this would be used by someone on your team?
Anyone integrating with the API programmatically

Can you sketch out graphically how you think this should look/work in practice?
A flag on the API parameters

How useful would this feature be to other users or organizations?
Useful, as per other conversations linked above.

How do we get rid of the group name in the dataset while downloading data through API?
Data Public Necessary for Query Links? [NO, it is not]
API extension (?parameter?) to allow 'labels' to be returned not just 'names'
nat July 1, 2021, 12:32am #2

Whilst I myself mostly use the JSON format API response, looking at other forum posts, this parameter/flag would also be useful for the /reports/{asset_uid}/export.csv extract as well. Thanks for considering!