Hello community.
We were carrying out a large data collection project with 150 collectors and over 100 daily submissions.
Despite the high rate of successful submissions, lately there has been a serious error in the submissions.

I don’t think it’s an error in the form it only occurred on the cell phone of two data collector.
I had access to the xml in the instances folder and there is no emoji inserted. Below I make the file available for analysis.
Parte Diária de Veículo e Máquina_7_2022-09-03_06-35-50.xml (3.8 KB)

@marcelsilva, could you also check if the survey project for this form exists on the server? 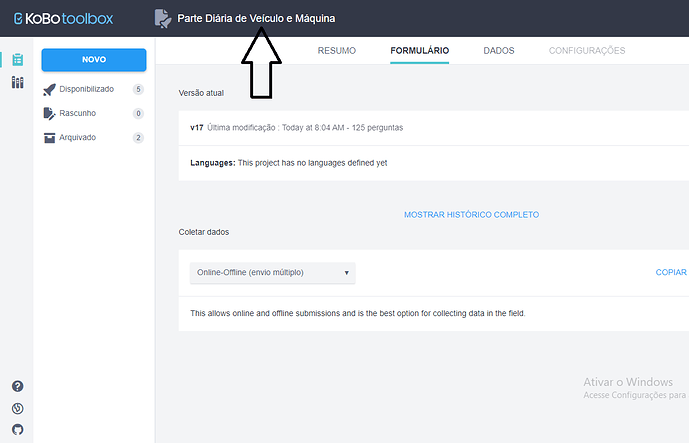 What I find strange is that in most cell phones it saves the xml in a folder with the naming pattern: Part of Vehicle and Machine Daily_Year_Month_Day_Hour
On the cell phone that failed, I found the following pattern:
Vehicle and Machine Daily Part_7_Year_Month_Day_Time.
We are already at version 17 of the form.
Below is the original file extracted from the cell phone where the transmission failed.
Parte Diária de Veículo e Máquina_7_2022-09-03_06-35-50.xml (3.8 KB)

I tried to change to the naming pattern above but the failure still persisted.

Is this a screenshot from View Sent Form?

No, this capture above it’s from “send finalized form”.

There is a hotel emoji

@marcelsilva, this post discussed previously should help you solve your issue:

Thank you! We were not able to access the saved forms to edit these. There were no forms in the phone, the 6 forms were only at “send finalised forms (6)”. Once you have saved the forms, how can you go back and edit ? The solution: We downloaded the files from the phone as to be able to find out what went wrong. In word notepad I was able to look up the lines and columns and found out it was indeed emojis that caused errors . I deleted them from these scripts and was then able to upload to the …