How long does it take Kobo to show OSM updates?

Hey guys! This is more of a question than a problem solving.
How long does it take Kobo to show OSM updates?
Context: in my project I need the georeferenced points I collected to be in certain polygons (which are houses in OSM). I had to add it a few days ago in OSM, and even though it’s already updated in OSM, when I open the KOBO map it’s still out of date. Do I need to wait a few more days for updates to appear on KOBO or will it simply not update?
Thanks in advance.

Sure!
When we are in the “Data” tab on the KOBO website, there is the “Table” option, there when I click on “View” one of the data has a map in the location part of the form (as in the attached figure, it is in Portuguese but it’s easy to understand). This map, it seems, is the OSM map but it doesn’t update as often as the OSM map updates on its website (the openstreetmap.org).
First I saw the error on the map that it showed in KOBO (the map in the figure), then I went to OSM and updated the figures, I waited for the OSM website to update (sometimes it takes a few hours or days) and then when I was sure it was up to date on the OSM I went back to KOBO to see if this map (the one in the picture) was up to date, but it wasn’t. My question is whether it updates and if so, how often.
The map that appears as an option in the Data tab updated with the changes I made, so I’m a little lost because the one on the form didn’t update. 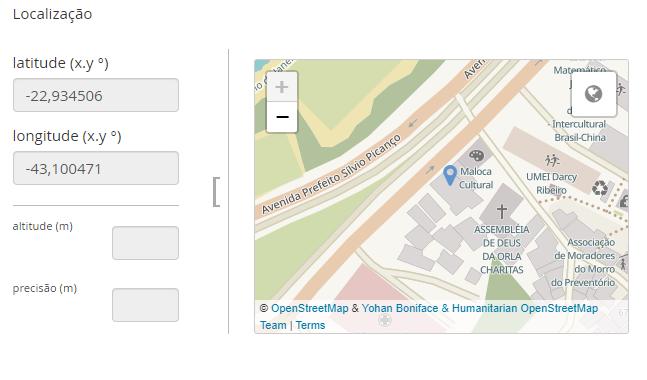 @alessandrafgrd, what was the method (i.e., did you use Enekto or did you use Collect android app`) you used when collecting your data?