So I’ve had kobotoolbox running on our on server for a few months now and users started asking for an easier way to edit user sharing/permissions. I noticed that on kobotoolbox.org there is a pencil icon to edit sharing permissions, but this is not the case on my local version. Below images see my version and the official version with pencil. 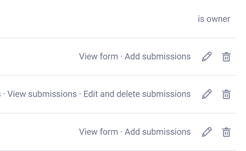 I have pulled from the latest kobotoolbox/kpi docker hub repo, but there is still no change to this sharing modal. What am I missing? How do I find the front end/UI code for the most recent live version of kobotoolbox? Is the docker hub kpi repo not updated often? or is this functionality not even IN KPI (though I find that unlikely).

Anyone else notice any discrepancies in the front end updates between official KPI source and docker?

2.019.40 (and subsequent versions) introduces a big change. Usage of two different databases for KPI and KoBoCat instead of a single one.

It will be merged into master soon.

Thanks for the reply! I ended up finding the two-databases branch, and came to the correct conclusion, then read the PR note about two databases. I will wait patiently for the updates/migration instructions, thanks again!