ODK Briefcase can decrypt some forms but not others

I have three forms on Kobo Toolbox that I want to download and decrypt using ODK Briefcase.

I have tried to download and decrypt them using Briefcase 1.15.0 but it can’t even manage to download the forms, saying there is an authentication error.
When I try to download using v1.17.4, it works (with the exact same credentials), but it can’t decrypt.

What I did is write a script using the command-line interface to download the forms using 1.17.4, and decrypt them using 1.15.0.

It works for forms 1 and 2, but not for form 3. The error I get is :
Error: org.opendatakit.briefcase.model.ParsingException: Encrypted file not found

When I look at the instance folders where the data were downloaded, I get for all three forms these files:

The difference is how submission.xml.enc is read for form 3.

Forms 1 and 2 appear like this when opened in a text editor: 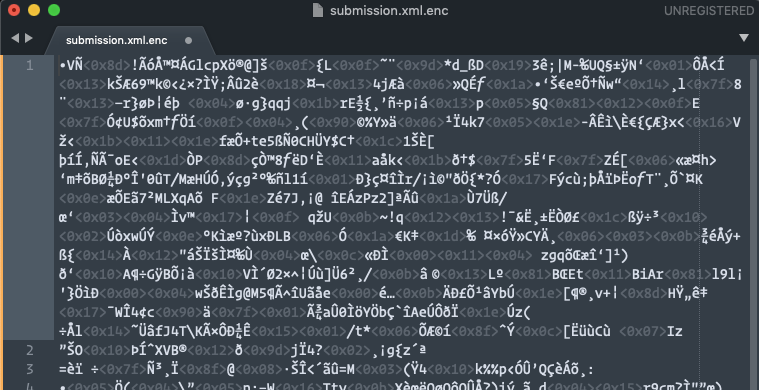 Is there any known reason why it appears encoded in a different way? I guess this is why ODK Briefcase can’t see the encrypted file, but I can’t figure out the reason and the solution of this problem.

Edit: Manually downloading the attachments from the data panel, as a zip acrhive, results in the same submission.xml.enc files that can’t be decrypted.

Edit 2: I have manually sent a new submission on Form 3 with the web interface, and its submission.xml.enc file appears as the ones from form 1 and 2. When I delete all the other submission.xml for the other submissions and only keep the one I just sent, it can be decrypted. If I leave the rest, it tells me it can’t decrypt the files.
The new submission was sent using the Kobo website, while the other 1380 were sent using the Kobo Collect app.
It looks like the website sends properly formatted UTF-8 submission.xml.enc files, while the app sends Hexadecimal-encoded files which can’t be decrypted by Briefcase.

Would you mind letting the community know the server you are using. Maybe that would unfold the issue you are having. FYI, a lot of community users were able to decrypt their forms using ODK Briefcase v1.15.

Would you try downloading the forms and then decrypting them with the same Briefcase i.e. v1.15. This should solve your issue. As you say Briefcase i.e. v1.15 does not let you download forms, would you mind trying the same with some other dummy projects to see if it’s only for that particular project or is a case in general.

Thanks for the suggestion, I discovered that Briefcase 1.15.0 can download projects created on my account, but fails for the projects created by my colleague.
The projects I need are created on my colleague’s account by I have the necessary permissions to access them. Proof is I can access them on the web interface and download them on a more recent version of Briefcase.
Is there some settings to change to allow 1.15.0 to download them?

In this case, would you mind downloading it through your colleagues user account (instead of yours) or request your colleague to download and decrypt.

All right, I will ask him for his credentials and get back here to update if it worked.

Edit: I have tried with my colleague’s credentials, both using the command-line interface and the GUI and I still can’t download.
The GUI returns these error messages:

And the detailed logs return this:

@Kal_Lam: I don’t know if it’s you or if I did it by mistake, but one of your posts was tagged as my problem’s solution, but the issue remains, so I unselected it.

Did anyone else have the issue regarding the authentication problem using Briefcase 1.15.0?