@SWolfLumos, I confirm that I was too able to save the filled-up form as a draft when collecting data with both Enketo as well as Collect android app.

While collecting data with Enketo, I could simply press the Save Draft as shown in the image shared below (to save the encrypted forms as a draft):

Similarly while collecting data with Collect android app, I could save the filled-up forms as a draft by unchecking the Mark form as finalized and then pressing the Save Form and Exit as shared in the image shared below. 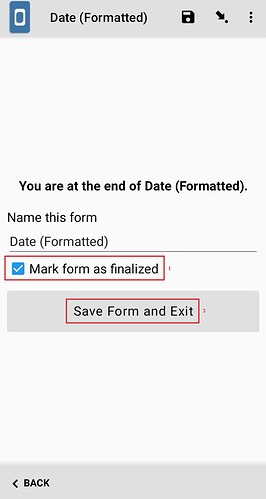 So the point I wanted to highlight here is that both Enketo and Collect android app supports saving a filled-up form as a draft. Maybe @martijnr should be able to explain more on this.

Thanks very much @Kal_Lam. @martijnr I look forward to hearing your thoughts.

Thanks for reporting. This may be a recently introduced bug!

I’ve filed it here: [tbc] It is possible to