My survey team is having challenges uploading surveys from KoboCollect. When they try to submit surveys, they get the following error: “Unable to resolve host kc.kobotoolbox.org”: No address associated with hostname." Any ideas on what the problem is? 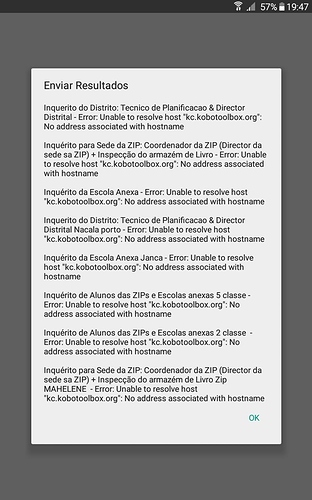 Welcome to the community! Would you mind checking the following to see if anyone of the same might have caused the issue that you are seeing at your end:

Kindly please let us know if this worked out for you so that we could document which could help other KoBoToolbox users to overcome the issue.

I entered the data from the computer separately, since I could not upload it. Maybe the problem was because I “authenticated” my admin account in Kobo after the rest of the submissions were made (i.e. previously it was open for anyone to submit). I’m not sure if that caused the problem, but now I’ve solved it by inputting from the PC, no worries.

Thank you for updating this to the entire community, @aahmed!

I experience the same issue.

The solutions proposed by @Kal_Lam did not work.
I am unable to enter the data manually because the survey contains many pictures that need to be send to kobotoolbox.

The issue started fairly recently. Everything went well for several months.
Could it be an issue that I switched from a paid plan (100GB) to a free plan (5GB) ? I think I deleted enough data to have sufficient storage left on the free plan.

Included a screenshot of my issue and of the general settings: 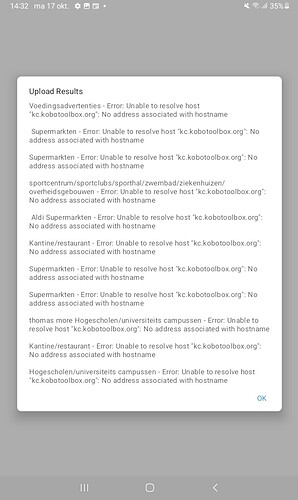 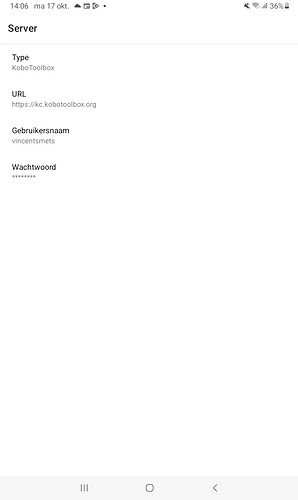 Issue resolved: I succeeded by selecting the files one by one and uploading them.
It took several minutes/survey as the surveys contained many photos, I guess the server timed out when I tried uploading them all at once.

Thank you for confirming!