After designing a question matrix, it appears that the form doesn’t allow more than 4 columns on the form. We’ve got several columns so it ended up pretty much messed once deployed because some column headers appear below other headers. It becomes impossible to understand the matrix. 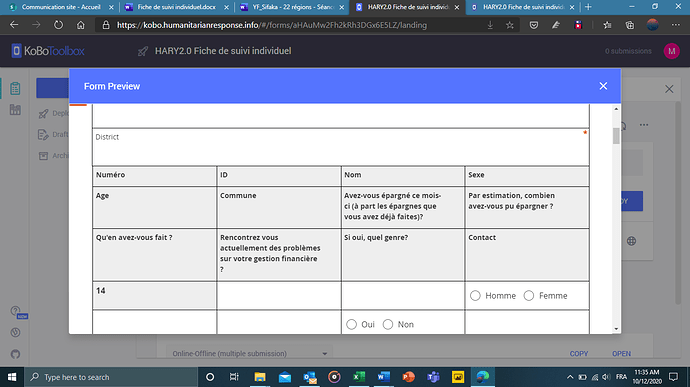 Welcome to the community @miranto! FYI, KoBoToolbox at the moment is able to handle 10 columns. You could use the following xlsform as a reference:

There is already a GitHub issue lodged for a request for more than 10 columns. You could follow the same through this post (discussed previously):

Unable to include 14 columns in a matrix question Form Building

Hi @astridcastro, This is an identified constraint seen at the moment where Enketo supports a maximum of 10 columns for a matrix question. As soon as users try to increase the column number to 11 or more the table gets distorted. I have created a GitHub issue which can be followed here: Have a great day!