All columns do not appear when connecting to powerbi

I have a survey that I would like to connect to PowerBI. I was able to make the connection to the form by providing the form link as well as authentication token, however it only displays 87 of the 298 columns. This survey is pretty long with nested skip logic. I currently have 1 submission using the form and the fields that appear in powerbi are the ones completed in the 1 submission. When I download the excel output from kobo, all 298 columns are there without issue. Would someone be able to advise?

Welcome back to the community, @tom.joseph! Would you try making a fresh connection to see if you are now able to see all the columns? We had discussions in the past that if some columns did not have entries and they were connected to Power BI those columns would not be visible (i.e., columns with entries are only visible in Power BI). Thus if you are trying to refresh the updates from a live data entry project some columns may not get updated if they had no records while connecting to Power BI.

Thank you for the quick reply @Kal_Lam . I tried to refresh the connection just now but still see 87 of the 298 columns. Are there any settings I can change to ensure that all 298 columns appear? I want to make sure all edits within power query are addressed without having to make any additional changes as submissions come in and new columns are generated.

Thank you for the clarification. The xls has 139/298 columns with a value in them. PowerBI continues to generate 87.

Also to note that column names also lead with the word group, where as none of the xls columns have the group name in them

Hello
The group prefix can be deactivated through your download setting.

@wroos Thank you for the advice. I took a look at the download settings found here:

@Kal_Lam Would it be possible to request functionality that would allow the user to specify if they want all columns to populate or not when querying kobo? Having a dynamically changing columns with an active survey does produce issues of its own with maintenance of dashboards tied to the kobo data.

@tom.joseph, do you mean in the custom reports?

@Kal_Lam To clarify, when querying Kobo from PowerBi, if there are optional parameters that could be passed to ensure all columns are generated within PowerBi.

To address the above challenge, would it be feasible to have an option where all the columns are displayed or the user can specify if only completed columns are to be displayed?

Hi @tom.joseph
I have gone through the communication trail above and I will narrow it to the last issue you raised as regards PowerBi.

This is an issue with PowerBi and how it pulls the data. As you rightly pointed out, you need to have data in all the columns to fully defined how you want those columns displayed. However, you could try adapting the fix done in advanced editor

If you havent change “ABSOLUTELY ANYTHING” in the names…could be that Power BI changed the amount of colums ut is getting in the query… I usually go to the advanced query editor… [image] 1st setp is always the source… [image] if you have “columms”, like here…with a fixed number: [image] Remove it… [image] And click done. Helps?

I would also suggest you scheme through the following topics
Stephane

@Kal_Lam To clarify, when querying Kobo from PowerBi, if there are optional parameters that could be passed to ensure all columns are generated within PowerBi.

To address the above challenge, would it be feasible to have an option where all the columns are displayed or the user can specify if only completed columns are to be displayed?

@ks_1 Thank you for the detailed and step-by-step workaround. I will test this out but think it should resolve the issue. Appreciate everyone’s time identifying a solution!

This is something that can only be solved on the KoBo side - there is no way for Power BI to know about any data that isn’t exposed via the API! Possible ways to solve this business problem:

The thing is, when using the UI to Expand Results then you select the list of columns to expand - but not all are automatically loaded dynamically every time. You can manually go in after there are more submissions, and manually click the ‘load more’ button then select them all and save 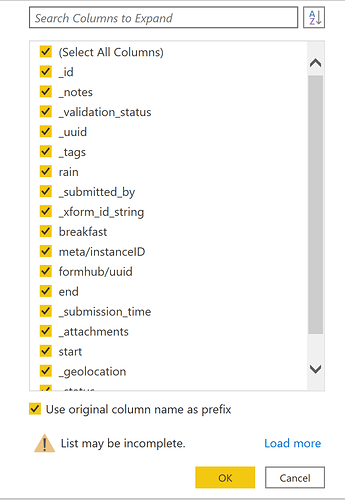 If you look, you can see that when using the PowerBI UI to expand columns then all the column names are explicitly listed, so when new fields come through they will be ignored as they’re not on the list. e.g.:

However it is also possible to code the PowerBI side to be more extensible - this often requires editing in the Advanced Editor etc. - i.e. by editing the Powerquery/M Language rather than clicking via the UI.

For example, using a trick from this YouTube video we managed to set it up so our Powerquery handles new fields automagically (in this case data_repeat is the column we want to expand to its fullest no matter how many underlying columns there are):

We were using it in the context of repeating sections combining data from multiple unrelated repeats had to do a bit of extra jiggery pokery to handle nulls etc. - I’m sure the below could be done more elegantly but here is our Powerquery code if it’s useful to anyone:

Most of my issues have been to do with 1 and 2 above. We should consider putting something in the suggestion box about #1 as I know several colleagues have hit this stumbling block also.

Further to the comment above re extensibility, I also try to do things in PBI that don’t explicitly list all columns - just the ones I want to manipulate in that particular step. e.g.

Hello @nat ,
We are not using Power BI, but maybe an idea:
If there is an easy option to import xlsx into power builder. You could start with an xlsx KoBo download, even with the first submission, which gives ALL columns in the right order, and import this XLSX into Power BI to get the data set configured.

This won’t work easily because the steps to import data from an excel file and a JSON web source are quite different.

@wroos sorry for my slow response - agree starting with a list of all the column names could be useful - however in the case of JSON vs csv source in PBI, as the JSON needs to be expanded in order to access groups/repeats then there’d be a bit of manual work to figure out that logic.

Also, the JSON always returns groups in the field names, can’t find a param to turn that off.

@tomisin do you have any repeats in your data? As far as I’m aware, csv is great for scenarios where there are no repeats, but if there are repeat groups then can’t access that data via csv (unless you know of a way?)

I am still facing the same problem there is some missing column on the power BI after I make connection using API. please help me i have Search discussion on the coming days.