I am trying to create a KoboTool Box form for a conjoint experiment. My design is simple: two variables, each with two attributes, generating four scenarios, from which I want two to randomly appear in pairs, in a random order for each survey respondent. Basically, I want my form to say:

I am going to read you two scenarios, and then ask you your opinion about them:
[Two out of four scenarios appear, randomly drawn in a random order, which the enumerator reads to the respondent].

I am halfway there by programing in four response options (as the scenarios to read out), such that they appear in a random order: 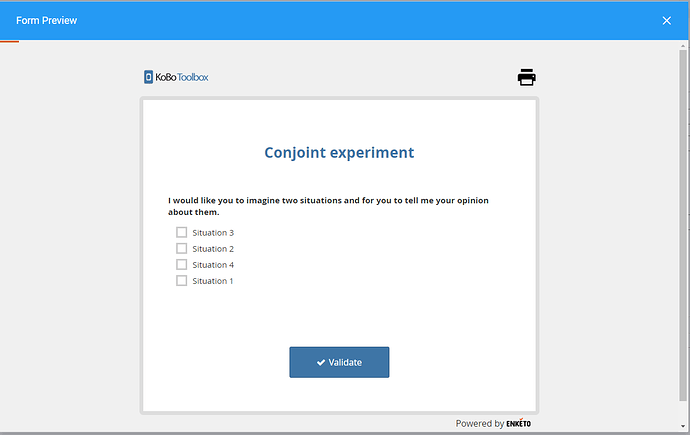 The next step would be to ensure my form only displays the first two options in this randomly ordered list of four.

Can anyone help with this second step?

Also, has anyone else used KoboToolBox to program conjoint experiments, and would you be willing to share some tips?

Hi @sdawkins
I have been a user of conjoint and have not tried this on KoBoToolBox. However, I believe the discussion happening on ODK around the same would definitely provide a solution for you. Please feel free to adapt this and provide feedback in the community for the rest of the team. I will keep this open for your feedback. Hi all! I'm working on a conjoint analysis for a project in Kenya and thought I'd share an example which could be helpful to others. This randomly selects different attributes to display. As @yanokwa mentioned, it takes advantage of randomization...