How to know the form version in KoBoToolbox?

First of all, Thank you all for making kobotoolbox, it"s very time saving.

I’m currently trying to parse the exported xml version of our forms in order to use it in another context. I managed to get the inputs and i see that the form_id is the name of the xml file. But I need to get the version of the form but i can’t find it in the UI interface of kobotoolbox Web or in the xml file.

Welcome to the community! You could figure out the form version in the form builder user interface following the instructions outlined in the image below:

Thank you for responding.

I think i was’nt specific enough, the version i am after is the version that is sent along with data submitted by clients ie: Odk Collect app. For instance it has the label __version__ and is equal to a string of more than 10 chars ie: ‘vAfhNhPfbShMndUwcmJjtJ’. 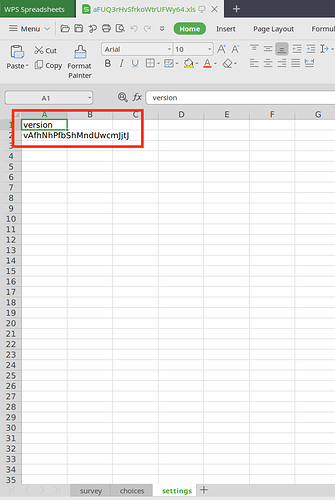 I’m planing to use the version string in my database as well as the form id in order to be able to tell what form a submission is related to.

Anyway, i’ve managed to parse the xsl version of forms, and i can get the version information from there along with other survey data. Thank you.