What browser for KoboForm offline

I am new to the Kobo tools. I am hoping to use them for fieldwork in rural locations where there will not be reliable internet connections, so I would like to send the offline version of the form builder into the field with my team so they can fine-tune forms in the field. However, I cannot figure out what browser to use for running the offline form builder under Windows 7.

irefox has the problem, as announced on this list, of not being able to load or save forms. I tried running the offline KoboForms designer (version 1.0.22) under Chrome, but it just hangs with a message, “Please wait while KoBo Form Designer loads…” I tried Internet Explorer and get the same problem. Is there another browser I should use to make this work?

Thanks for any help anyone can give me, and thanks to the KoBo team for making such a great tool for collecting data in the field. Even if the offline forms designer will not work, the other tools are very useful and I appreciate the effort that went into writing them.

You’re right - this is a known issue and we’re hoping to find a fix for this problem soon.

Your best option for now is to use the offline version of KoBoForm in Firefox and do the following:

To save your KoBo form to an XML File on your computer:

It’s a bit roundabout, but it will allow your teams to build forms offline and push them to phones all the same. We’ll try to fix the issue soon. 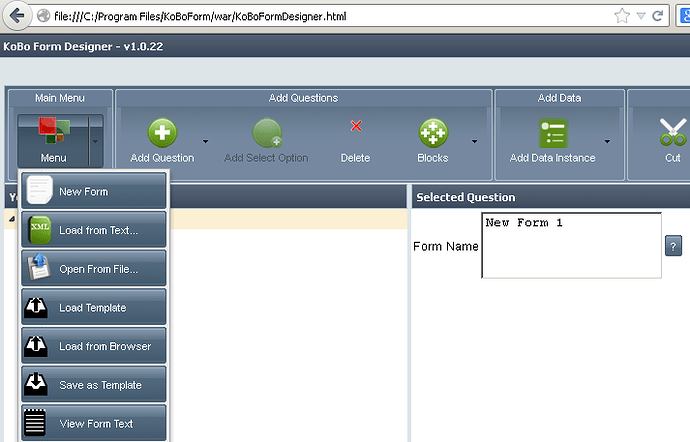 Cool. Thanks for the workaround. That sounds like it will do the job for us.