Dear friends,
i want to sync data from Kobotoolbox to Google sheet.

Do you have tool or addon do it?

Hi,
There’s a small script for that, which just uses our API and GoogleSpreadsheets code. See https://github.com/kobotoolbox/kobocat-googleapps-scripts

Thanks Tino,
Do you know, how often sync/update data between Google sheet and Kobotoolbox? Ex: 2x/ hour or xxx/day

Hi Ti,
It’s updated when you click the button after following the instructions. If you have suggestions on how to improve it or the documentation, please feel free to edit it - it’s open source code!

Do you known other not free solution, can i pay for this.

Thanks for your info,
I have a question in step of sync it

can you help me how to doing that step

thanks for this great initiative.

Nothing happens and I do not get any possibility to Select my kobocat form which updates this sheet.

Do you have any clue?

This could be a great tool but I am also stuck at point 5. I don’t get the option to choose a form. The script asks for my API code each time.

Any help would be appreciated.

Quick update which might be helpful. I was able to use the execution transcript to determine that the code was getting hung at line 121

I replaced the “kobocat_users[0][“username”]” with ‘USERNAME’ and the code is working.

Hopefully others will find the same resolution.

thanks for the update.

I have tried to implement your input but on my side I am still stuck at step 5.

No matter if I click on “set-up” or “import data”, the script keeps on asking my API and informs me that it is saved. But it never pops up with my list of forms…

Any clue to solve this?

This is a very important feature!

Like the others, I am stuck at the point that it asks for my API token after going “Update from kobocat” -> “Setup.” After entering it, I am not prompted to select the form I would like to use. Am I doing something wrong/is there anything I can do manually to connect it to the right form?

Perhaps separately, the execution hints also say that the UiApp API is deprecated.

I agree. This is why I have asked about Zapier updates so that Zapier can do the leg work of updating content in whatever service we use. Does anyone know of a way to use Zapier with Kobo?

Like others here, I also had problems with the project that Tino linked, so I ended up having to write my own. You can find it here: https://github.com/pcurrier/KoboToolbox-GoogleApps-Scripts. It can pull data from kobo into a google sheet, and can also push from a google sheet back to the kobo server. It supports basic and token authentication (haven’t been able to get OAuth2 working yet).

The code is working for the projects I personally deal with, but I have not tested it exhaustively on a wide range of different surveys. You should consider this project experimental, and do your own testing.

If you have problems feel free to open an issue in github.

I’ll give that a try. Thanks!

I made it work with your way! thanks a million for that!
Something maybe useful I found out is that it doesn’t shows the questions that are in a nested group. I solved it using only 1-level grouping but if anyone has any good idea it’s more than welcome

I was freezing on step 5 as well, but after deleting all of my unused forms until I got down to 2 or 3, I was able to select my desired form.

I tested Kobotoolbox sync with google sheet and it was worked, but Manually,

I mean((You must click on the Kobotoolbox button and then click on the entry then “Select the survey(s) to import” then choose “Import data into which sheet?” finally “Import survey data” for update the data from Kobo to excel sheet)).

But, I need automatically, do you have any ways

Dear Ahmed,
I am glad that the Kobo-GSheet synch is working on your side. It is also working for me.

You can easily set up some automated time based triggers on any Google script. I have set up mine to update every 5 minutes.

I hope this helps! 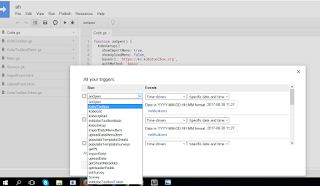