Select-one-from-repeats not supported in KoBoToolbox

I have just come across the "select-one-from-repeats’ function in ODK documentation and would like to use it on a form. The form loads in xlsform online but it does not deploy in KoboTool box. Is this function not enable in KoboToolBox at this stage or could there be a problem I am missing?

Welcome back to the community @Rusti! Yes, this feature at the moment is not supported in KoBoToolbox as it’s only compatible with applications that uses pyxform v1.3.1 and greater. FYI, please be informed that KoBoToolbox still uses the lower version of the pyxform.

Thanks for the response Kal.

Hello,
It would be great, if KoBoToolbox can find a way to allow users to deploy forms valid for the current ODK version. Even if not yet implemented in KoBo (like meanwhile allowing audit type in Formbuilder).

As partly recommended, many users use ODK Collect together with KoBoToolbox and it’s servers. And interesting new features cannot be used because KoBo doesn’t allow to deploy those forms.

@Rusti, @wroos, kindly please be informed that I have created a GitHub issue for this feature. You could follow the same here …

Feature present in ODK but not in KoBoToolbox

Description Online validator seems to support this cool new feature where a user can create a select one choices from a text...

1 Like
Is it possible to create a select_one type question where the choices are all the names entered in a previous repeat group question?
Household roster member as option in follow up question
How I can create a select one list from previous grope information
Rusti March 1, 2021, 11:44am #8

Thanks Kal, it would be very useful to have this feature in Kobo.

@Rusti, @wroos, kindly be informed that the select_one from repeat feature is now available with KoBoToolbox with the upgrade of pyxform. You could design your survey project as outlined in the image shared below:

In the survey tab of your xlsform: 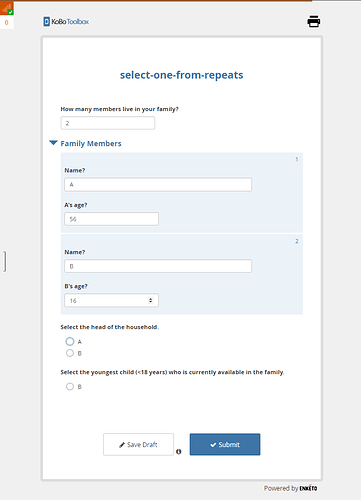 For more details on other new features, please feel free to go through our release note:

Hello all, we’re pleased to share our work on a new release of KoBoToolbox, which was deployed on kf.kobotoolbox.org at 31 May 2021 20:35 UTC, and on kobo.humanitarianresponse.info at 1 June 2021 22:00 UTC. We hope you enjoy this release, and please do not hesitate to use this forum to report any new issues that you may discover. New features and enhancements PR Description Related Issues #3174 kobocat#706 kobocat#724 Allow users to synchronize forms in the legacy interface with t…

Thank you very much for this, I will look into updating my forms to make use of this function.

I appreciate all the development that does into these platforms.